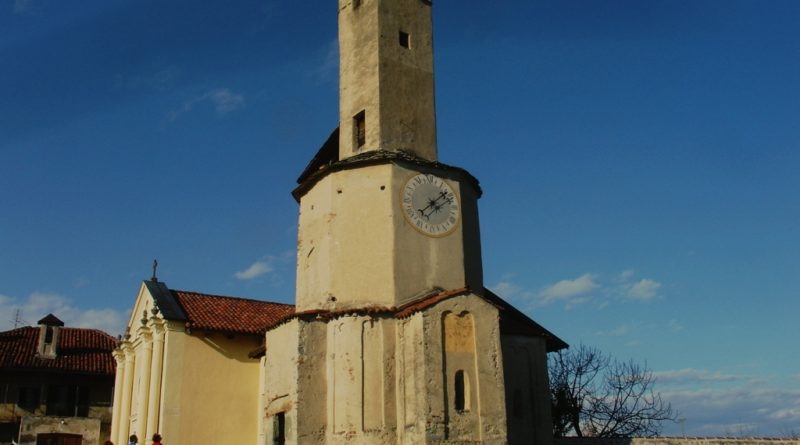 Hello everyone, I’m Alberto Giacomelli, learning and working as a conservator/restorer since 2000. This article is about a technique used in 2016 on a very peculiar baptistery located in the village of San Ponso Canavese, 36 km from Turin. I hope you will enjoy this as much as i did writing it. 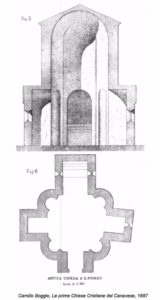 Formerly a cemetery, as testified by the sepulchral stones dated back to I-II century, on site researches have pointed out that a first Parish Church with baptistery was present in V a.C. The octagonal structure has massive walls, more than 1 meter thick (39 inches), made mainly of stones, and their length is irregular. There are eight apses, round and rectangular alternatively; windows are minuscule compared to the size of the building, and give more the impression of a castle slits.

On top of this imposing base was built the dome (tiburio) with a semicircular vault covered by a roof made of langstones locally called Losa (Lose for plural). What now? Do you see that finger like bell tower? Well, that was added around 1580….and completely changed proportions to the structure, but it is nothing compared to the deep modifications undergone by the Parish Church, that in 1700 was turned into a baroque structure. This is but a piece of his story: such an ancient building has much more to tell.

This contract was centered on conservation and restoration of external surfaces, and believe me, it has been an amazing journey through time, techniques and materials with a bit of headache regarding the ways to obtain a final result satisfactory for both the client and heritage authorities (picture1 on the top left).

Starting the cleaning process from a pretty stubborn biological patina, for the first time i had the opportunity to study from a very close distance the nature of the coats that were applied over time. The first thing observed was the uneven state of conservation: from south to north side there was a huge gap that couldn’t be handled with just a conservative approach.

In the picture 2 at the bottom left the north front of the bell tower: the coat was in suchabad state that after the cleaning and removal of those parts that couldn't be saved, there was barely any left. In the picture 3 at the bottom right the south front on the bell tower: here there was almost no biological patina, overall surface was consumed, fine aggregate lost, but the worn out effect was very beautiful. 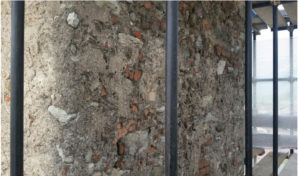 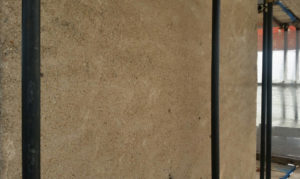 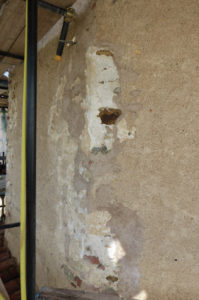 est and East were of course a mix of these two extremes, and the challenge here was to find a common finish for all these different existing conditions: from a weathered coat down to a wall with a brand new scratch coat. Here we are at dome level: in different areas the last coat applied (in ‘800) came down revealing what we suppose to be the medieval coat. We decided to not cover these fragments: they were even more solid than the coat covering them. As you can see the color is quite different from the ‘800 coat: it was made mainly with a mix of grey sand and mostly a reddish granite sand coming from “Belmonte”. Belmonte is a natural park at present and renowned until 1980 for his particular stone quarry with a unique color called “Rosso Belmonte”. Surfing the internet it’s possible to find manufacturers that nowadays are selling a substitute for this fine, but out of production, material. As a final thought: the whole mountain has a lot of clay deposits and this material, with the granite sand, flows naturally into small water channels, eventually forming small fluvial deposits mixed with dirt chilometers away from the point of origin. My guess is that the last coat was made using a “not so clean” aggregate and for this reason the final color was dark so weathering had so much of an impact on it. Below you can see another portion of the dome surface: it shows clearly that also here we had to take care of a complex of materials, some of them we removed because were made with cement or in such a poorly way that conservation was out of question (picture 4 on the top left).

In the picture 5 at the bottom left: this is a restoration wormade during last century. They tried to copy the clayish mortar adding pigment and smashed bricks to imitate the red sand but it was a failure. Won't tell much more about this here but cement was used ad in a poor way. 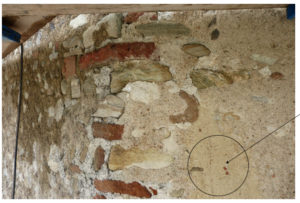 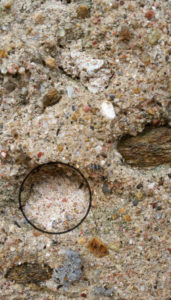 I hope this picture (picture 6 on the left) will help to make clear the difference in color of the two coats. The black circle points out a portion of the older one: the contrast between them is sharp. The last portion, the baptistery, was badly damaged at the base. Water falling from a roof without a gutter and a bad fixing intervention made with cement forced us to a massive removal. Reconstruction was made using lime mortar with structural properties and adding small quantity crushed bricks and marble 4-5 millimeters in diameter. Lastly the overall surface was left coarse in order to obtain a good grip for the future finish and also imitate the original weathered surface.